The work David produced transcended the already lofty notions we had for our next album - so much so it became signature and center to the entire output. Really beautiful stuff. 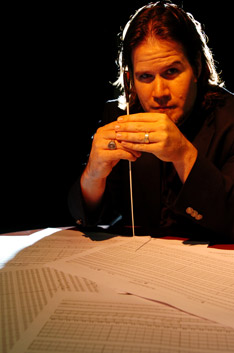 David J. Anzaldúa Pierce is a native of South Texas, and began his musical career playing piano at an early age, later moving to trombone in school bands. By sixteen, he was performing with various dance bands such as the Eddie Galvan Orchestra, motivating him to pursue his Bachelor’s of Music Education from the University of North Texas. Working as a freelance trombonist throughout his college years, David also led and co- led several Cuban-influenced bands, such as “Rob G y los LP’s,” “Norte de Havana,” and “Mi Son,” which have all won several Dallas and Fort Worth Music Awards from years 1999 - 2006. After earning his degree in music education from UNT, David was hired at Southlake Carroll ISD, teaching all levels of music from beginning band to the 12th grade. In his 10 years of teaching in Southlake, David helped to develop an award- winning jazz program, with nine total jazz groups at multiple levels.

David currently writes and arranges for numerous ensembles of varied styles, and his works have been performed by orchestras, jazz groups, and symphonic bands across the country. He has works commissioned by professional touring & recording jazz bands, such as the Jazz Ambassadors. He has also written commercial jingles for Taco Bell, On The Border, and Neiman Marcus as well as freelance composition work for North, Moonbot, and Live Nation. In 2009, Mr. Pierce created an original Halloween musical review, “Cirque du Horror.” A true collaborator of the arts, he works alongside of many of the metroplex’s visual and performing artists to produce this original, ever evolving body of work that provides fun, frights and merriment for the whole family. Pierce also acts as the arranger and musical director for the Denton’s Holiday Lighting Festival, where he collaborates with Denton musicians of just about every genre to feature their original take on holiday songs. David teams up with everyone from big band entertainers to Indie Rock icons like Tim Delaughter from the Polyphonic Spree as well as the Baptist Generals, with whom he composed and arranged 4 orchestral pieces for their album “Jackleg Devotional to Heart.” David has also partnered up with the Grammy-Winning Bubba Hernandez, formally of Brave Combo, to feature some of the works of his grandfather, Cenobio Hernandez, in a true “Orquestra Típica” setting. More recently, Mr. Pierce has worked with 3X-Grammy-Nominated-Artist, Elle King, on her “Shake the Spirit” album, as well as Austin-talent Kelsey Wilson, a.k.a ‘Sir Woman,” whose single “High Road” was just released in 2019, and has orchestrated strings and horns for the supremely-talented-rising-superstars known as The Texas Gentlemen.

Currently, he lives quite happily with wife Jessica and beautiful son Jonah in lovely Denton, Tx, where he continues to write, perform and teach music.